Nitro coffee brings a beer-like experience to coffee drinking. Minuscule bubbles of nitrogen or nitrous oxide give the brew a heaed and make it go down smooth.

A recent phenomenon, nitro brew coffee is a popular drink in third-wave coffee shops but rarely made at home, until now.

If you would like to know how to make nitro cold brew at home, you have come to the right place.

In our step by step guide we show you how to make nitro coffee using two different methods so you can enjoy the best cold brew on nitro at home.

What is Nitro Cold Brew Coffee?

The nitrogen in coffee creates minuscule bubbles that give the coffee beer-like qualities.

A head forms when the coffee is poured, and the mouthfeel is incredibly smooth and creamy when drinking.

Also like beer, cold brew on nitro is only enjoyed cold. Heating it would dissipate the nitrogen bubbles.

The key difference is that nitro cold brew is made by infusing the coffee with nitrogen after brewing.

The exclusion or inclusion of nitrogen gives the two types of cold brew substantial differences.

Traditional cold brew coffee is rich and smooth, and its body makes the coffee well-suited for adding cream.

Sugar can also be added, and the coffee can be sipped directly from a cup or through a (preferably compostable) straw.

Cold brew is typically served over ice to keep it cold, although a cold brew concentrate can be mixed with hot water to create a hot cup of cold brew too.

Nitro is even smoother, as the nitrogen bubbles create a mouthfeel that no standard brewing method can replicate.

However those nitrogen bubbles don’t go so well with cream, and stirring in sugar will disturb the coffee’s head.

Another key difference between nitro vs cold brew is that nitro coffee is served without ice and always served cold. It can’t be served hot, for the bubbles would dissipate. 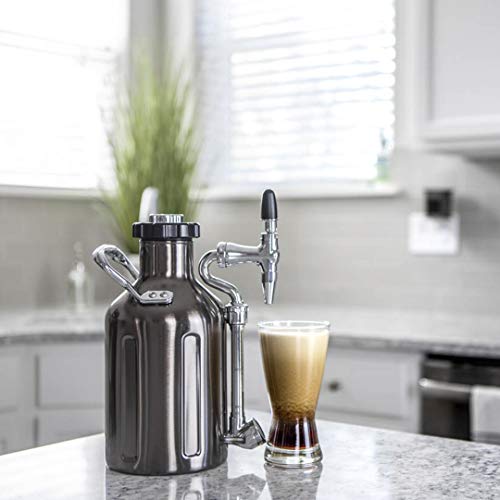 When Was Nitro Cold Brew Invented?

Like much of coffee’s history, the origins of nitro coffee are hidden in legends and lore.

What is definitively known is that the coffee drink was invented sometime in the early 2010s. Then by the mid-2010s multiple companies had it available in cans.

Esquire reported on a nitro-like predecessor from The Queens Kickshaw (New York, New York) in 2011.

Regardless of who had the very first nitrogen infused coffee, it took the third-wave coffee scene by storm.

Both Cuvee Coffee and Stumptown had canned nitro cold brew just a few years later, and Starbucks put it in 500 stores by 2015.

Today, numerous coffee shops throughout the United States and world are offering the beverage both on tap and in a canned form.

How to Make Nitro Cold Brew at Home

One of the primary reasons home baristas are keen to learn how to make a nitro cold brew is the cost.

Store bought nitro cold brew is pretty expensive and the cost can really add up over time.

While nitro coffee kits are still not that cheap, they are far more affordable in the long run than a regular trip to Starbucks or the supermarket for canned nitro coffee.

So let’s take a look at how to make nitro cold brew coffee.

The basic steps to make your own cold brew are as follows:

For more detailed instructions, see our step by step guide for making cold brew in a french press here.

In order to turn traditional cold brew into nitrogen infused coffee, the next step is to infuse the cold brew coffee with nitrogen or nitrous oxide.

There are two ways you can do this. You can either use a whipped cream dispenser or a nitro cold brew keg. We cover both methods in detail below.

A nitro coffee dispenser is by far the quickest and most affordable way to make your own nitro cold brew at home.

To make nitrogen brewed coffee with a handheld dispenser you need:

Although pint-sized dispensers can also be used, a quart-sized one will use cartridges more efficiently.

Once you have the necessary equipment, follow these steps to infuse it with nitrogen:

Regardless of whether you use this method or a keg, dispensing the nitro cold brew against the side of a frosty glass will yield the smallest head and best result.

Any remaining nitro cold brew in the canister should keep for several days. Store in the fridge.

Compared to using a keg, making at home nitro cold brew with a whipped cream canister has the advantage of being more affordable and producing smaller amounts of the beverage.

These canisters are readily available from retailers and restaurant suppliers at reasonable prices.

Plus they’ll generally make enough for one or two people to enjoy over a few days. 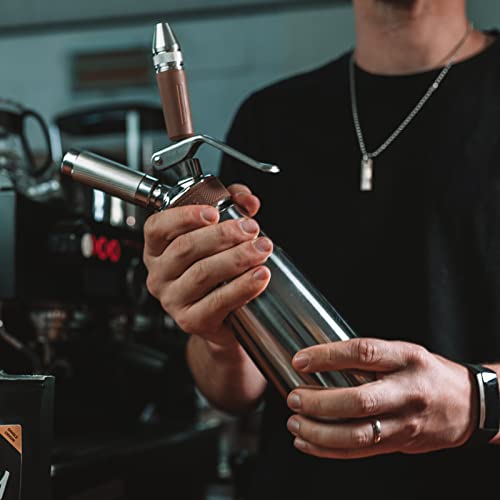 The best nitro dispenser for the home is the Hatfields Nitropress.

The biggest downside is the limited amount that can be made at one time if you’re entertaining.

So if you want to make a large batch of nitro cold brew coffee, the other option is to use a nitro coffee keg.

It is important to follow any specific instructions that are included with your keg and pay particular attention to the type of charge it requires.

The nitro cold brew will keep well for several days, and pouring drafts directly against the side of a frosty glass will yield the best results. 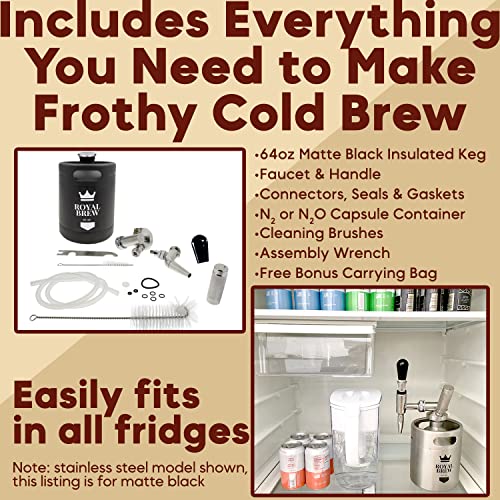 Click here to check the price and read the reviews

If you entertain frequently, this is a very cool way to make coffee for your friends.

We reviewed all the best nitro cold brew coffee makers for home to help you choose.

Both nitrogen and nitrous oxide (NO2) will work when making nitro cold brew at home, but nitrogen is preferable.

The gas that’s used in pubs to make draft beer is commonly a mixture of 75 percent nitrogen and 25 percent carbon dioxide, and nitrogen will provide the most beer-like traits.

Also, nitrogen is tasteless and inert (stable). It’ll easily dissolve in cold brew, producing fine bubbles that have no effect on its flavor.

Nitrous oxide on the other hand has a minorly sweet taste and creates slightly larger bubbles.

It’s frequently used in whipped cream cartridges because the gas is highly soluble in fatty liquids and has that natural sweetness.

In cold brew, though, the sweetness can mask a coffee’s inherent traits and the bubbles aren’t quite as fine.

So if you’re looking for the most pure-tasting nitro coffee brew and your nitro cold brew kit accepts nitrogen charges, take full advantage of the setup by injecting coffee with pure nitrogen.

If you’re looking for an easier way to make nitro coffee and/or usually sweeten your coffee, nitrous oxide is more accessible and is perfectly suitable.

Nitrogen coffee is most often drunk black, although sweet cream, foam, sugar and flavorings can be added after infusion, like this pumpkin cream cold foam.

Try the coffee before you add anything, as it has a smooth, creamy taste that is different from any other brew method.

Also, consider using whipped cream or a sweet cream foam rather than heavy cream if you normally would use dairy.

Flavored syrups are a good addition to nitrogen cold brew, and nutty ones are especially well-suited for the coffee’s profile.

Experiment with hazelnut, toffee nut and french vanilla to see how you like them.

Alternatively, go with adult-themed flavors of Baileys Irish cream or amaretto for a different kind of caffeine kick.

Other flavored cold brew recipes to try that can use nitro instead of regular cold brew include:

Read next: 15 ways to flavor coffee at home

How to Sweeten Nitro Cold Brew

DIY nitro cold brew can be sweetened with a sweet topping or sugar, and any flavored syrup will add its own sweetness.

If you want to add sugar, create a simple syrup and add it to the bottom of your glass.

The syrup will dissolve easily as you pour the nitro cold brew, not interfering with the bubbles or head that’s created.

However you choose to sweeten nitro cold brew, only add sugar after infusing the cold brew with nitrogen.

Adding sugar before nitrogen will make your nitro cold brewer harder to clean.

How Much Caffeine Is In A Nitro Cold Brew Coffee?

A common question is how much caffeine is in nitro cold brew.

The caffeine in nitro cold brew is the same as an equivalent amount of traditional cold brew.

The nitrogen bubbles will deliver the caffeine to your body’s neurologic system faster so it may seem stronger.

Plus there may be more caffeine in a glass of nitro coffee because it’s not poured over ice like a cup of cold brew.

The actual amount of caffeine in a cup of nitro coffee depends on many factors including:

Even with variance, though, this is one of the most caffeinated forms of coffee.

How Does Starbucks Make Their Nitro Cold Brew?

Starbucks nitro cold brew is made with a keg system that infuses the chain’s standard cold brew with nitrogen.

Starbucks nitro brew is available in a range of sizes, and it can be flavored with syrups or topped with cold foam.

You can make your copycat Starbucks cold brew nitro with their breakfast blend ground coffee or cold brew concentrate.

If you’re a fan of cold brew nitro and regularly order it at coffee shops, don’t just limit your enjoyment of the beverage to visits to cafes.

Now you know how to make nitro coffee, you can begin making your own homemade nitro cold brew.

Not only will you save money, you can enjoy the smooth, caffeinated beverage anytime you want!

Ready to make great coffee? See our top picks for the best cold brew coffee beans here or hop over to all our brew guides for more brewing ideas.

Disclaimer: As an Amazon Associate I earn from qualifying purchases.

Want to save this for later? Pin it to your Pinterest Board.

Founder of Creators of Coffee, Rachel is a passionate coffee lover, SCA member and former barista, who also loves to research and share practical tips on everything to do with coffee. Favorite way to make coffee: With an Espresso Machine

This site uses Akismet to reduce spam. Learn how your comment data is processed.

Welcome to Creators of Coffee where we share practical coffee tips and helpful product information so you can make great coffee at home.

Read more about us here.

We use cookies on our website to give you the most relevant experience by remembering your preferences and repeat visits. By clicking “Okay”, you consent to the use of all cookies.
OKAYPrivacy Policy
Manage consent

This website uses cookies to improve your experience while you navigate through the website. Out of these, the cookies that are categorized as necessary are stored on your browser as they are essential for the working of basic functionalities of the website. We also use third-party cookies that help us analyze and understand how you use this website. These cookies will be stored in your browser only with your consent. You also have the option to opt-out of these cookies. But opting out of some of these cookies may affect your browsing experience.
Necessary Always Enabled
Necessary cookies are absolutely essential for the website to function properly. This category only includes cookies that ensures basic functionalities and security features of the website. These cookies do not store any personal information.
Non-necessary
Any cookies that may not be particularly necessary for the website to function and is used specifically to collect user personal data via analytics, ads, other embedded contents are termed as non-necessary cookies. It is mandatory to procure user consent prior to running these cookies on your website.
SAVE & ACCEPT